The Survival of Beauty and Art, Aguilar Press, 2013 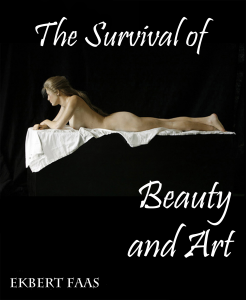 The Survival of Beauty and Art develops a new theory of aesthetics and art.  Art is embedded in what is called “the artifactual,” i.e., things (like beehives and churches) created by some of nature’s organisms, rather than by nature itself.  Aesthetics, by contrast, is rooted in primordial susceptibilities like those of unicellular amoebas at the dawn of life, going in pursuit of what is nutritive or trying to avoid what is aversive.  In their over three billion years of evolutionary development, these primitive, aesthetic impulses were enriched by further natural, and finally cultural ones.

From its first chapter, Survival attempts to show how artworks, instead of removing themselves into ever more rarefied spheres of the cultural, for the most part continue to draw on its more natural roots.  Wherever appropriate, it fleshes out theories by interpreting individual artworks, backed up by illustrations.  In this, Faas draws not just on evolutionary and neuroscientific insights, but on the full arsenal (familiar to him from previous publications) of older interpretive, iconographic, psychological, and art historical approaches.   Thus, his new theory of aesthetics/art, although grounded in the life sciences, fully incorporates whatever can be salvaged from traditional humanities disciplines.  Hence, Survival should be of interest to readers looking for the unprecedented and unfamiliar as well as to those continuing to cherish the old.

4 Responses to The Survival of Beauty and Art, Aguilar Press, 2013