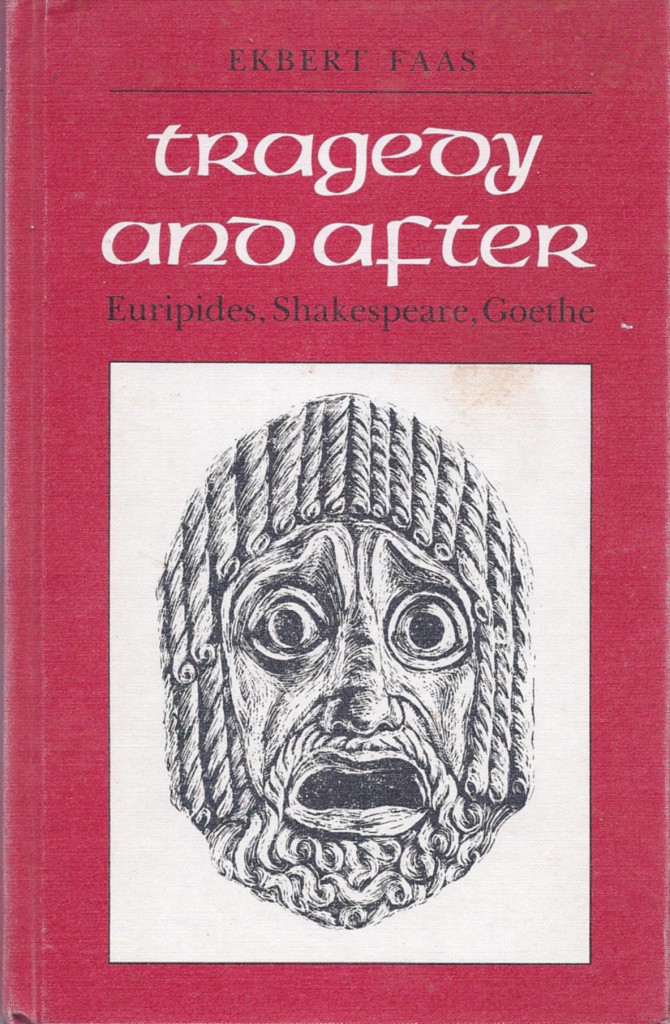 Currently in print and ebook.

According to George Steiner’s The Death of Tragedy of 1961, tragedy was bound to die out with the waning of transcendentalism after the seventeenth century … “Tragedy and After believes that such a process is also – or rather – to be seen in the individual careers of certain dramatists at crucial periods in history, and notably Euripides, Shakespeare, and Goethe. Each of these came to find the tragic world-view unsatisfying. In each there was with advancing years – though in Euripides with intermittent reversions – a movement, it may be via ‘anti-tragedy’ (in which the supposed redemptive value or meaningfulness is denied and the suffering seen as ‘absurd’), towards ‘post-tragedy,’ in which the suffering leads through to some kind of new life, spiritual rebirth, or cyclical on-goingness. Euripides, after an anti-tragic Electra, reached post-tragedy in his Heracles and Orestes, the Bacchae being a reversion to the anti-tragic. Shakespeare’s Lear, Hamlet, and Troilus, superficially tragic, can be more profoundly interpreted as anti-tragic, but an advance to the post-tragic vision of romance was to give us Pericles, Cymbeline, and ultimately The Winter’s Tale and The Tempest. Goethe, influenced by Sanskrit drama, passed beyond tragedy in his shift of aim and verdict as between the first and second parts of Faust.” (Charles Garton, Modern Language Review, 82, 1, 1987, 158-59)

“Addressing the widely held notion that supports the death of tragedy, Faas points out that tragedy in Aristotelian terms dies ‘in the works of Euripides less than half a century after the genre was created by Aeschylus.’ What really happened, Faas argues, is the recurring death of the belief that human suffering serves some teleological or ennobling purpose. Drawing his illustrations from Euripides, Shakespeare, Goethe, and contemporary dramatists, Faas finds the ‘Anti-Tragic’ in dramas that locate the cause of suffering in situational or psychological particularities and the ‘Post-Tragic’ in works that escape tragic necessity through the employment of alternative hypotheses, from magic to bioenergetics. Tragedy and After is a penetrating study of a genre still widely read. Indexed and fully documented, it merits the attention of scholars and readers of tragedy and inclusion among undergraduate and graduate collections devoted to dramatic theory.” (W.W. Waring, Choice, January 1985, 124)

“Ekbert Faas … argues that the common assumptions that tragedy is dead and that its demise must be linked to modern thought, are deceptive. Concentrating on the later plays of Euripides, Shakespeare and Goethe, Faas … demonstrates that the rules governing the structure and characterization of tragedy were parodied and repudiated long before modern times. Moreover, he states that although this anti-tragic and post-tragic transcendence of tragedy is overwhelmingly evident in the modern times, especially in the theatre of cruelty and the theatre of the absurd, tragedy is by no means dead. It survives in such heralded modern works as Arthur Miller’s Death of a Salesman and Luigi Pirandello’s Six Characters in Search of an Author. Both essayists [i.e., E. Faas and Harry Levin in Playboys and Killjoys. An Essay on the Theory and Practise of Comedy] are erudite and authoritative. With much scholarly flair they provoke thought by challenging widely accepted literary theory. Both essays should be required reading for students of dramatic criticism.” (Gregory Peterson, The Globe and Mail, 25 April 1987)

“The main argument of this book is well summed up in Faas’s concluding chapter: ‘Too much speculation has encouraged the rather simplistic notion that tragedy, alive for some two thousand years, has gradually died in our time’ … Faas means plays like Pirandello’s Six Characters in Search of an Author and Miller’s Death of a Salesman in which the anagnorisis requires … the revelation of material long repressed in the protagonist’s mind. Such texts have strong Freudian elements, though Faas shrewdly observes that just as Hegel’s view of history seems to reflect the process dramatized in Aeschylus’s Oresteia, so Freud’s theories may be more indebted than Freud realized to Sophocles’ Oedipus Rex. The ‘anti-tragic’ tradition which Faas postulates consists of works that are locked in a dialectical relationship with traditional, relatively affirmative, tragic texts, they resemble sons who quarrel bitterly with the father on whom they depend. Thus ‘Euripides, then, for large parts of his Electra, seems to follow either Aeschylus or Sophocles. But he does so only in order to crush the expectations such parallels have aroused’ (p 50). Similarly, ‘King Lear, like Troilus and Cressida, inverts the mainly classical paradigms of tragedy more directly embodied in Romeo and Juliet. The suffering which in Romeo and Juliet leads to the reconciliation of two families is shown in Lear to be neither purposeful nor ennobling’ (p 109) … Tragedy and After offers a clear … thesis; the textual analyses are concise and generally functional. Its postulation of a dialectical relationship between relatively predictable tragedies and jarring works like King Lear and Troilus and Cressida seems sound.” (Cedric Watts, British Journal of Aesthetics, 26, 2, January 1986, 177-178)

Faas argues that “we cannot have tragedy if we do not believe in a higher purpose to human life that makes sense of and justifies what is otherwise undeserved and meaningless suffering … when faith in divine purpose fails, one response is anti-tragedy … insist[ing] on the pointlessness of everything. For those who attain a more detached view, post-tragedy expresses their feelings about man’s place in the world. This form Faas finds in Shakespeare’s romances and in the second part of Goethe’s Faust. Anti-tragedy he discovers in Euripides’s Hecuba, Hercules Furens, and Orestes, and in Hamlet, Lear, and Troilus and Cressida.” (M.W. Dickie, Shakespeare Quarterly, 38, 2, Summer, 1987, 261-262)

Faas “analyzes the manifestations of anti-tragedic elements found in Euripides and Shakespeare and the nature of post-tragedy represented by Shakespeare and Goethe, as well as by the modern theatre of cruelty and theatre of the absurd and asserts that tragedy is far from defunct today and survives in psychoanalytic variants in plays by dramatists including Pirandello and Miller.” (1984, 36)

“In Tragedy and After … Faas champions those works with a purposive, as opposed to a pessimistic view of life, coupling this with the belief that the genre improperly practiced is self-destructive. He also asks if modern writers were really the first to whom tragedy, as narrowly understood, seemed ‘limited’ or even ‘erroneous.’ Nietzsche, to be sure, echoes in the background. Romeo and Juliet in this reading is a conventional tragedy where plot, in Aristotle’s sense, takes precedence over character. Faas is after the affirmative element that great tragedies contain, and so he applauds Troilus and Cressida for its ‘relativist spirit’ (p.102), and Lear since in frustrating all our expectations it moves beyond a constrictive tragic pattern and hence a negative view of life. Hamlet, both character and play, doesn’t come off well here, for Faas sees the Prince as a negative, self-righteous man, incapable of that growth celebrated in the Romances, a genre he finds to be the proper extension of … tragedies like Lear. … I appreciate the observation that in The Winter’s Tale rebirth occurs in this life, and not in some dramatist’s heaven.” (Sidney Homan, Shakespeare Survey, 1985, 470)

“Of critical discussions of Hamlet, my major discovery since writing this book is Ekbert Faas’s groundbreaking essay … This essay explicitly develops a ‘Nietzschean reading of Hamlet’ that closely parallels mine, especially on such issues as Hamlet’s suicidal impulses and the impact of the afterlife on his thinking.” (Paul Cantor, Shakespeare: Hamlet, Cambridge University Press, 2004, 100)

“Faas has written a provocative book, challenging the familiar literary and philosophical theories of tragedy from Aristotle onwards. His judicious use of Nietzchean insights both stimulates and compels assent. Exuberant scholarship from first page to last.” (Canadian Poet Irving Layton, personal correspondence)