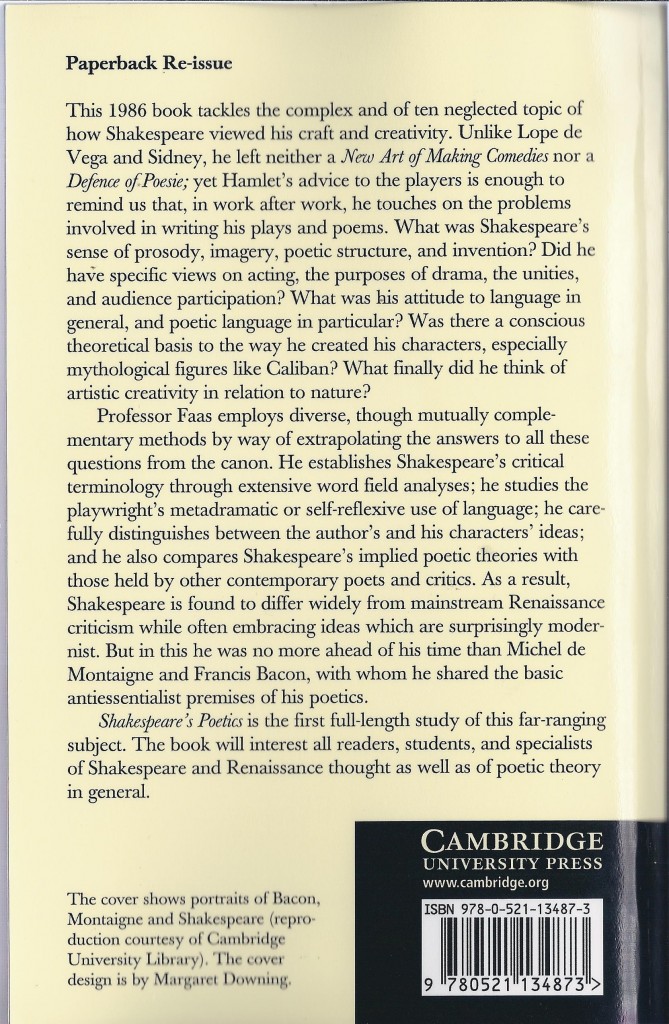 “This is a thoroughly documented compendium of Shakespeare’s implied views on his own art … genuinely illuminating comparisons with Montaigne and Bacon …” (Year’s Work in English Studies, 67, 1986)

“Prof. Faas has provided a scholarly and fascinating piece of research. As he admits, the task he has set himself is a near-impossible one – but it is nonetheless well worth the effort of research and study.
His approach is threefold: Each of the characters’ statements is interpreted: ‘1. within the context of the work in which it occurs, 2. within the context of the Shakespeare’s oeuvre in general, and 3. against the background of comparable non-Shakespearean writing of the period.’”
The author places Shakespeare’s thought in the context of contemporary philosophy and criticism, especially that of Bacon and Montaigne. His analysis will interest both Shakespeare scholars and students of literary creativity.” (Margaret Hallissy, Book Review, 1986)

“Mr Faas’s work is the first full-length study of Shakespeare’s poetics and its scope is comprehensive … Mr Faas shows that Shakespeare’s small agreement with the common traditional Renaissance critical theories is the product of his affinity whether or not he knew their writings directly with ideas propounded by Bacon and Montaigne. Their ‘radical new view of life’ (p. 80) which Shakespeare shared may be called ‘antiessentialism’ … In short, even though Mr Faas does not describe it in these terms, Shakespeare’s poetic was radical, subversive, and existentialist. In subsequent persuasive pages we learn of ‘Shakespeare’s inverted Platonism’ (p. 126) and discover that Shakespeare’s ‘fine frenzy’ was crucially different from the traditional furor poeticus (p. 139). Finally, in a discussion of the comprehensive theme of art and nature based on The Winter’s Tale, Mr Faas concludes that ‘to the antiessentialist . . . there is only one nature, the world of flux and cyclical return, of which human artistic endeavour is as much a part as any ‘natural process’ (p. 196). Mr Faas’s learned, humane book should be read and re-read by everyone interested in poetics, Shakespeare, or the Renaissance.” (T.H. Howard-Hill, Review of English Studies, 38, 151, 1987, 386-87)

“The book is learned, clearly written, with many references, footnotes and an extensive bibliography. It has many fascinating insights into other writers as well as into some major Shakespeare texts. It is probably not for the general reader but is of very special interest to anyone concerned with drama and poetry or anyone who studies Renaissance thought in general.” (Margaret Penman, Toronto Star, October 1986)

“Faas demonstrates that Shakespeare, like Montaigne and Bacon, espouses an antiessentialist poetic, rejecting the orthodoxies of his day and dissolving the traditional dichotomy between art and nature. For Shakespeare, Faas argues, imagination dictates to reason throughout the creative process, celebrating not the truth behind things, but the final, mysterious reality of a nature forever in flux … thoroughly researched, massively documented and painstakingly indexed … serious students (i.e.: graduate and upper division undergraduate) will want to review the evidence Faas amasses.” (D.O. Dickerson, Choice, November 1986)

“[Shakespeare] refuses the rigid categories of Renaissance theoreticians, being willing to use whatever ideas suit his needs of the moment. This is because, counter to the usual assumptions of contemporary criticism and practice, he has a high regard for the imaginative powers of his audience; he consistently disrupts the stage illusion while trying to make his spectators lose themselves in the spectacle…Shakespeare’s Poetics is very thorough in examining everything that can be used in reconstructing a Shakespearian poetic theory.” (Peter Hyland, Theatre Research International, 12, Summer 1987, 171-72)

This entry was posted in Uncategorized. Bookmark the permalink.