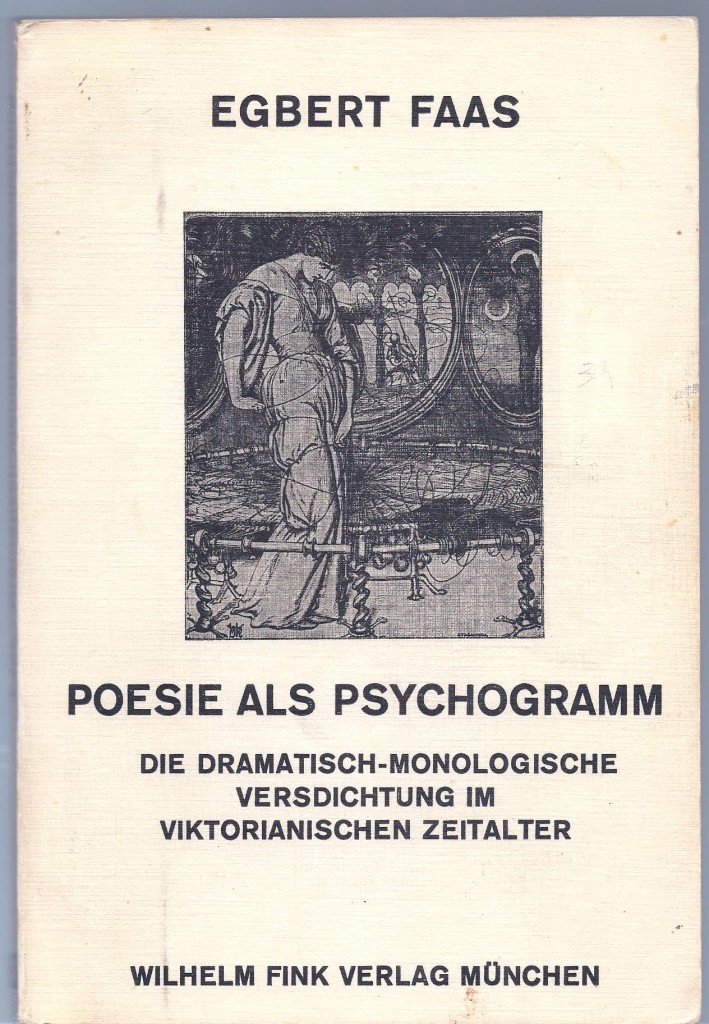 (Translated from the German): “The study is presented lucidly and appropriately with regard to the subject. … [it] closes a big gap in English literary criticism. It is the first comprehensive and systematic exploration of a so far uncharted area. The author unfolds a gigantic, hitherto for the most part uninvestigated mass of material. Apart from the main practitioners of the dramatic monologue such as Browning and Tennyson as well as otherwise well known poets like Rossetti, Morris and Kipling, he surveys some 300 poetae minores like Robert Buchanan, Augusta Webster and John Davidson. In addition to all this, Faas has unearthed a lot of contemporary Victorian criticism, innumerable reviews and other writings in the areas of psychology, philosophy, and historiography. He demonstrates in an amazing manner the degree to which Victorian criticism and the numerous contemporary reviews can still provide important insights for our understanding of the genre. The dense and concise presentation achieved despite the wealth of all this material is a model [of scholarship]. … excellent.” (W.G. Müller, Germanisch-Romanische Monatsschrift, 1978, 360-63)

“the study tries to map the stylistic, structural and thematic characteristics of the dramatic monologue in relation to the Romantic “poetry of experience” (Robert Langbaum), from which it originated … Dramatic monologues have been variously defined as the “poetry of situations” (Walter Pater), of character portrayal (Park Honan), or of empathy on the part of their authors (Robert Langbaum). By contrast, Victorian reviewers, in agreement with poets such as Tennyson, Browning, or Buchanan, had long recognized that the depiction and analysis of psychological phenomena are far more central to the genres form and content. They heralded Browning and Tennyson as the poets of “mental science,” labelling their poems “portraits in mental photography,” “dramas of the interior” or simply “psychological monologues” long before the present designation became the generally accepted one.” (English and American Studies in German, 1975, 100-102)