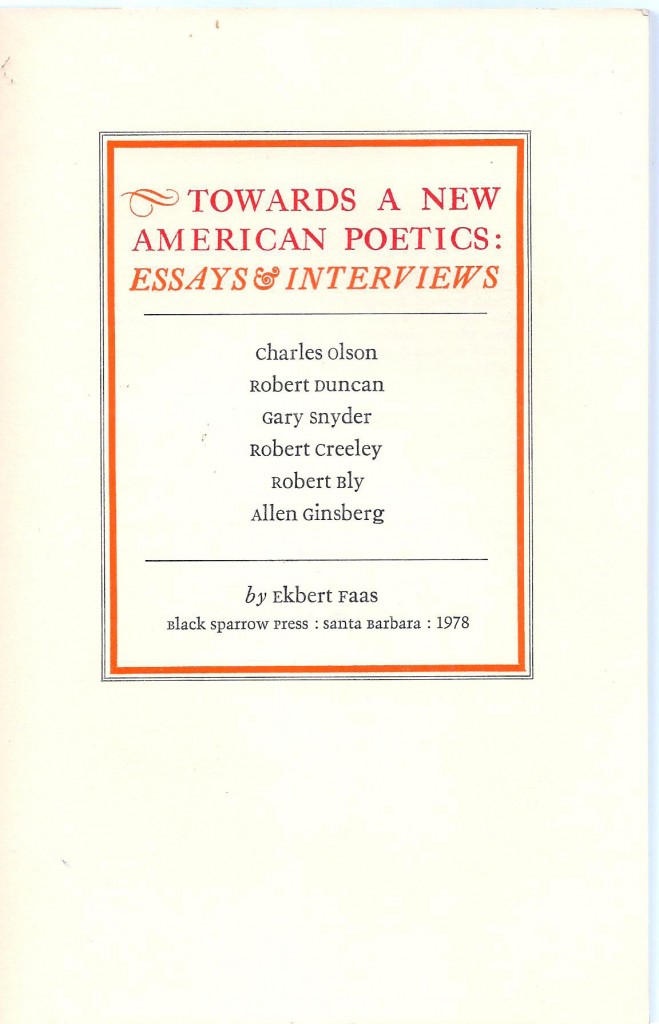 “a book that should become the standard text on the subject in universities across the nation.” (Novelist Joyce Carol Oates, personal correspondence)

“Undoubtedly the best contribution [to scholarly involvement with the poetry of the last three decades] comes from an, as it were, migrant scholar, now teaching at a Canadian university. Ekbert Faas’s Towards a New American Poetics … is a unique combination of interpretation and dialogue between poets and their interviewer-interpreter. Poets presented comprise Charles Olson, Robert Duncan, Gary Snyder, Robert Creeley, Robert Bly, and Allen Ginsberg. While the late Olson could have only an essay dedicated to him and Duncan is represented only in an interview, both forms are available to the reader in the other parts of this fascinating volume. Such a union of forces as that of John Martin, a devoted West Coast private press owner and publisher, with a brilliant younger German scholar is a rare and most gratifying event.” (H. Galinsky, American Literary Scholarship, 1980, 460)

“Faas’ book seems destined to become a central document for anyone interested in the nature and direction of modern poetry.” (Booklist, Oct.1, 1978)

“The collection is essential to an understanding of contemporary poetic visions and the politics of poetry, as practised by almost all those dealt with here and their sometime rivals, particularly James Dickey. An excellent addition to a shelf of contemporary poetry.” (Los Angeles Times, Dec. 6, 1978)

“I’m intrigued by many of the ideas behind the new poetics, sometimes even convinced. The human animal has assumed a reckless domination of all life that threatens that life. Primitive societies have proved wiser in many ways than the civilizations that have all but swept them away. I can even agree that it is harder to write well in closed forms than it was a hundred years ago … Faas’ book … shows on every page how much labor of thought and perception has gone into this anti-rationalist poetics.” (Roger Mitchell, Minnesota Review, Spring 1979, 101-104)

“an important addition to your library … Holding advanced degrees from European universities, his highly abstract approach is often original … Even the poets often find an amusing difference in the way his mind works from the way theirs do.
So it’s not an easy book to describe, and it’s a book to be pondered, not skimmed, but I found the time I devoted to it highly rewarding, especially, perhaps, the Creeley section. … indispensible.” (Independent, Mar. 6, 1981)

“an important study of six poets who should be read as individuals but who are nonetheless relevant to this overwhelming context … Faas has written an introduction and an essay on Charles Olson, there is an interview with Robert Duncan, and then both an essay on and interviews with Gary Snyder, Robert Creeley, Robert Bly, and Allen Ginsberg. Faas is a good scholar, and thus he is not looking for a thesis to ride, but all six of the poets selected believe that poetry should be birthed from the primal self.” (Max Westbrook, Western American Literature, 14, 2, 165-170)

(Translation from the Dutch): “With diligent thoroughness, Faas has built a platform from which inspirations can take flight.”

“Faas describes this collection as an open-ended sequel to the study of the new art form as ‘no longer of “mimesis but of kinesis” … it attempts to graph several further evolutions of the new art by focusing on some of its major practioners amongst American poets.’ The essay on Olson serves as a map, and the preamble as a guide through a rich forest of ideas, images and speculations by some of the best known names in American poetry. It is almost impossible to see, in any age, the aesthetic and poetic forest, for the individual trees, and in the current flowering of pluralism, it is even more difficult. This is a spectacular first step, however, and if for no other reason than its galaxy of stars, the book is bound to become a classic.” (Small Press Review, 10-11, 69-70, Oct.-Nov. 1978)